Mirni Kutak d.o.o. is a family company, with the leadership of Frane Marković, owner and manager of the family Hotel and Restaurant. Mr. Frane Markovic was a choice of Business Intelligence Institute to become The most successful entrepreneur 1999th and 2003. year.

NEW! Award based on the business results. The “golden book” of the best Croatian entrepreneurs and managers 2012. 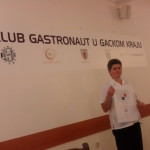