Gacka is one among the three best known river in the world. The beauty of this surrounding nature, the ambiance, and the fishing opportunities are able to capture the hearts of all those lucky enough to ever come and visit the worldwide known beauty.

Gacka is extremely rich in both flora and fauna. The vegetation is abundant owing to the favorable water temperature, convenient chemical structure, silty bed, and moderate flow. Underwather vegetation grows throughout the year, but its growth is nevertheless more pronounced in the warm seasons. As many as 25 plant species have been identified: Algae, Bryophytes and woody plants.

B / From Stanišić Bridge (the fifth concrete bridge) downstream fishing is allowed with an artificial fly and all other artificial baits.

C / On the Švica and Gusić lake permitted to fish in compliance with statutory hunting measures.

For those who prefer to hunt small or big game our hunting destination offering you  guaranteed catch.

Hunting is allowed throughout the whole year –  one shot – pax EUR 200.00 plus catching by category 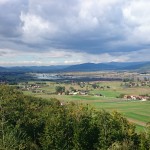